The Fabrication Process of a Thick Film Heater 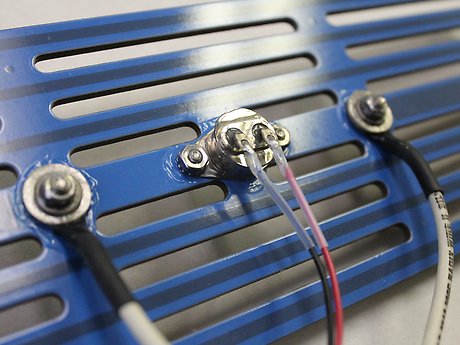 The shape or geometry of the substrate is dictated by that of the surface for the specified form factor. Depending on the substrate, the cutting is done by laser or diamond saw, which is according to the engineering drawing of the shape and dimensions as well as the sequence of the cutting action. The information or requirement on cutting is stored in the computer that controls the cutting.

The glass or ceramic based dielectric material is prepared or emulsified into the form of ink or paste with the right viscosity by using an organic carrier or solvent. The dielectric emulsion is printed, coated, or sprayed over the metal substrate.

In case of non-metallic substrate such as the ceramic substrate, this step may be skipped. Certain surface activation treatment may, however, be necessary to promote and enhance the bonding between substrate and printed traces.

Pastes or inks are commonly prepared by mixing or compounding the required ingredients, such metal or metal oxides and ceramics, with a solvent to produce a paste for printing described in the next step. The mixing is typically done on a two- or three-roll mill machine. The mixing must be microscopically dispersive so that a high degree of homogeneity between the mixing ingredients can be achieved. High paste homogeneity can eliminate hot spots and burnout of the finished parts.

The conductor material will also need to be made into a liquid state or in the form of paste or ink for printing if needed.

Stencils for screen printing on the substrate is usually a thin sheet of material, such as plastic and metal, with the pattern of heating traces cut from it. By using a squeegee to force the paste or ink through the cut-out patterns in the stencil, heating traces or conductor traces are transferred over to the surface of underlying substrate.

The stencil determines the arrangement of heating traces and ultimately the pattern of heat distribution. It is designed to allow heating according to the surface where heat is needed. The power density can be adjusted area by area by changing the stencil’s pattern to form a multi-zone TFH.

The printing process is to deposit resistive and/or conductor traces onto the non-metallic substrate or the dielectric layer on the metal substrate. Many technologies to print films for electronics or heaters have been developed, this article focuses on the screen-printing technology. Other interesting printing technologies will be briefly described.

Screen-printing has a long history and is the most simple, flexible, and economically friendly method. Screen-printing is still the most widely used process to make TFHs as of today. Printing is done by forcing the pastes or inks through engineered stencils by using a squeegee onto a flat or cylindrical surface of a substrate. There are different methods of printing:

The deposition process using screen-printing allows for close control of the thickness and width of the traces or heating elements, thus accurately controlling the heater resistance, wattage, watt density, and uniformity of the heated part.

In this step, a printed heater undergoes heat treatment to make a strong bonding between the substrate or dielectrics and the printed traces. The early stage of curing or firing evaporates any liquid that is used in the step of paste preparation. During the firing process, the metal and metal oxide particles in the ink are bonded by virtue of sintering in the solid state. The bonding forms a morphology in which a network of many nanoscales electrically conductive pathways is formed, which becomes the permanent heating traces or elements. Also, during the firing process, the glass particles are melted, and the molten glass fills up the interstitials between traces, between the traces and substrate, and to bond the entire structure to attain high mechanical strength. At the same time, the structure keeps a certain degree of bendability because of the ratio between thickness and lateral dimensions is very small.

Heatron developed temperature profiles that are optimized for the processes of bonding involving various pairs of substrates and inks.

Various metals and alloys can be used for making the termination, including silver, platinum, gold, and silver alloys. The attachment of lead wires can be done by spring contacts, soldering, and ultrasonic wire bonding. The connection points or areas can be encapsulated using epoxy or silicon RTVs. Visit Heatron's Thick Film Heating Products and Services for more information on the products offered at Heatron.

Step 8: Final quality inspection typically consists of tests such as:

For more information about the structure of Thick Film Heaters, the fabrication process, advantages of TFHs, applications in the industry, and what Heatron's Thick Film Heaters have to offer to you, download our complete Thick Film Heating guide. This full guide provided by Heatron will allow you to develop a better understanding about TFHs to assist you in finding the right one for your project(s).